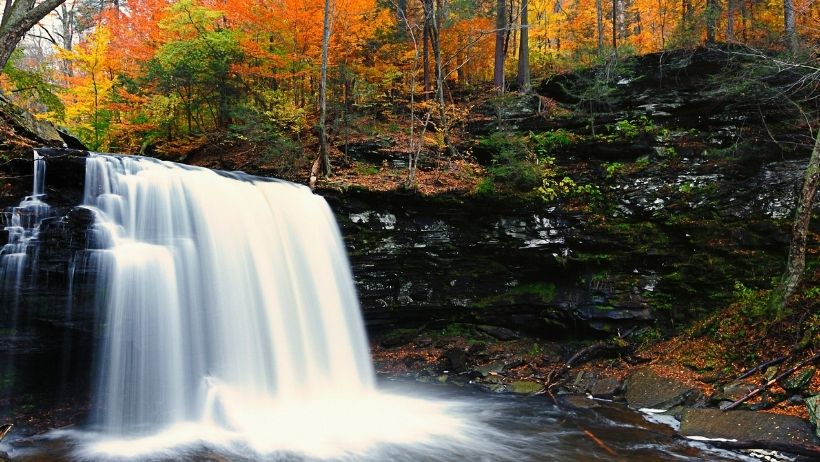 The Most Spectacular Waterfalls in the World

Published on November 17, 2021 by Fairbutler

Even if the incredible amounts of water fall anything but silently into the depths, waterfalls always have a certain calming effect. They are just a wonderful natural spectacle that one likes to watch. Here is the list of the most spectacular waterfalls in the world.

The Huka Falls near the city of Taupo, which is located on the North Island of New Zealand, is enormous. It is more than 220,000 liters of water flow 11 meters down here every second. The best view is from a bridge that runs over the waterfall. 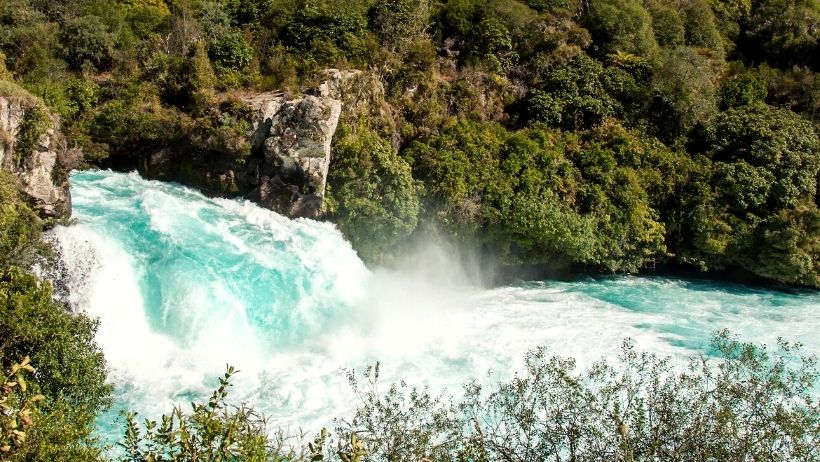 The shimmering green water of the Krka River flows through the national park. Thunders down in the form of several small and large waterfalls. And finally collects in the shallow basin below the stepped waterfall Skradinski Buk, which is the absolute highlight of the park. The great thing is that you can even bathe right next to the waterfall! 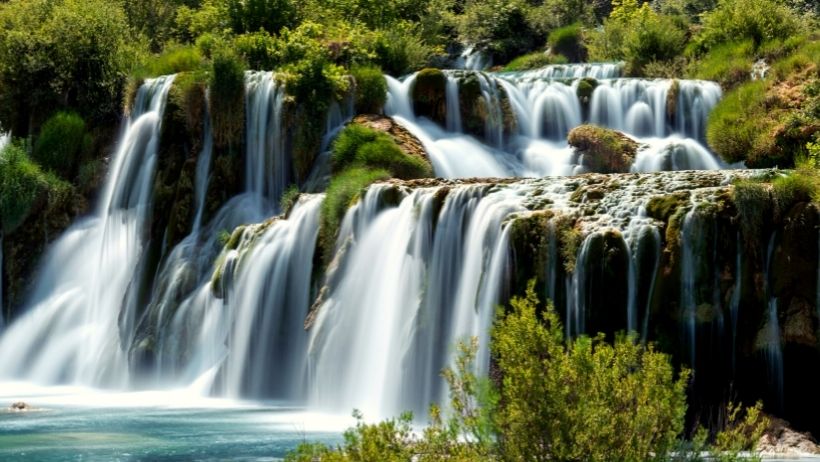 The Kuang Si Waterfall is located in the Tat Kuang Si Park Nature Reserve in Southeast Asian, Laos. The approximately 60 meters high, cascading waterfall flows into several natural pools, in which the refreshing water collects and invites you to swim. Sounds like a place that should be on your bucket list, right? The best way to get to the park is from the city of Luang Prabang, which is located in northern Laos. 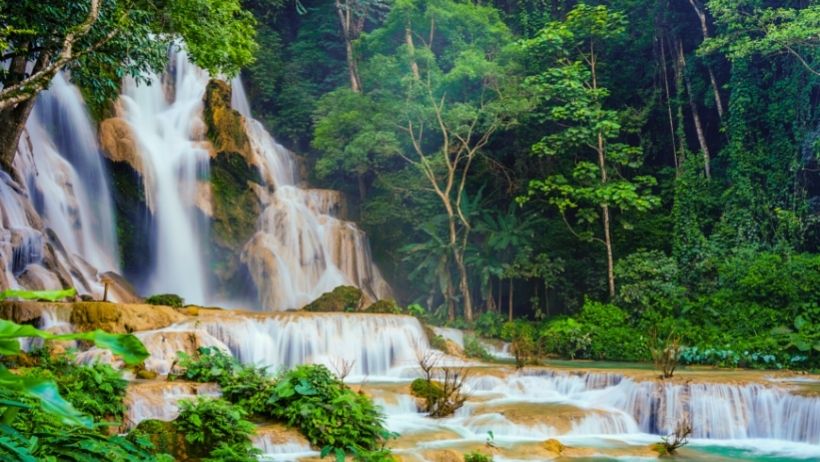 The Ban Gioc Detian waterfall is located exactly on the border between China and Vietnam. It is one of the largest waterfalls in the world, which is located in two countries. The beautiful waterfall is an absolute insider tip among Vietnam travelers because many visitors do not end up in the far north of the country, which can be reached after a 7-hour journey from Hanoi. A long journey that is worth it. 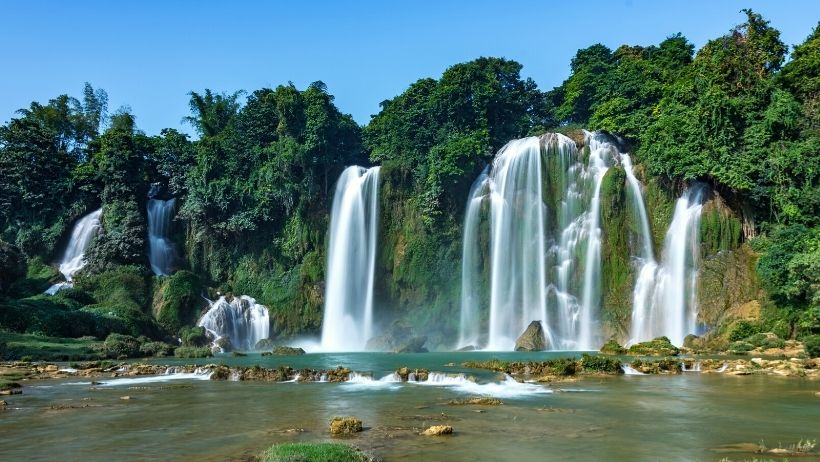 The amounts of water from Seljalandsfoss in Iceland plunge 66 meters into the depth, but the real specialty of the popular photo motif in the south of the trendy island is that you can even walk behind the waterfall, look through it and take unique photos. Just impressive, isn’t it? 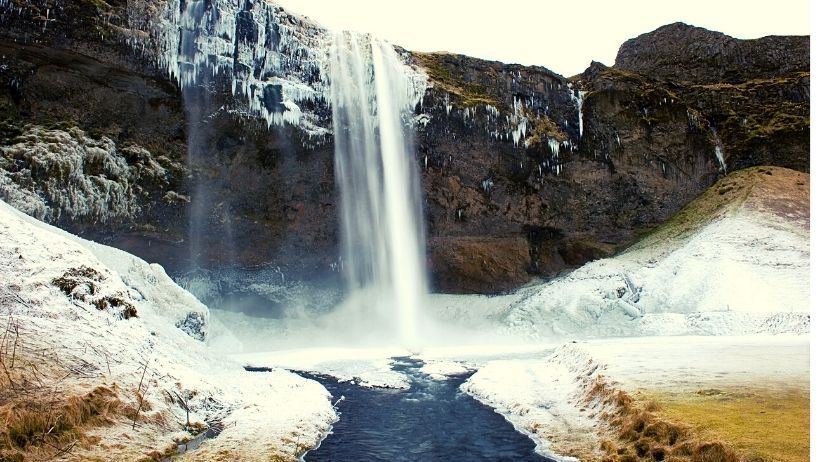 But Seljalandsfoss is not the only waterfall in Iceland that made it into my list of the most beautiful waterfalls in the world. The mighty Dettifoss, one of the most powerful waterfalls in the world, located in the north of Iceland, is no less impressive. At a width of 100 meters, tons of glaciers waterfall over 44 meters deep into a gorge. Incidentally, the Selfoss, another spectacular waterfall, is only a few hundred meters away. Natural spectacles that should be on every Iceland bucket list. 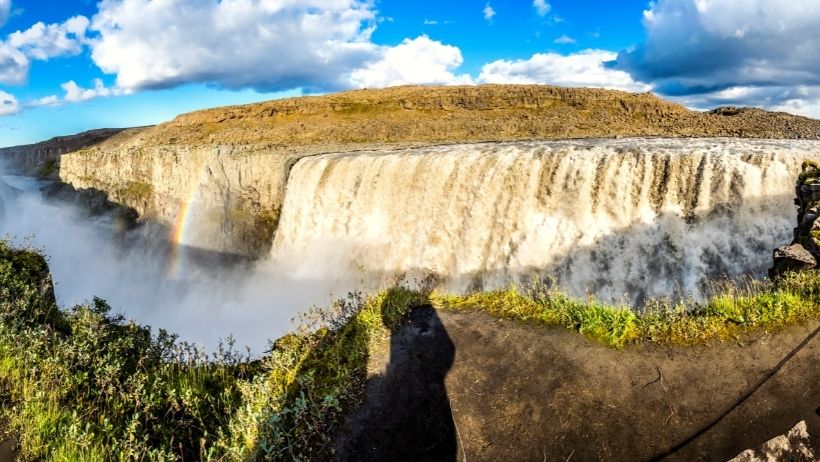 When talking about waterfalls in Iceland, Gullfoss on the famous Golden Circle should not be missing. The two-tier waterfall is a real visitor magnet due to its easy accessibility, which thousands of Icelandic fans marvel at every day in the main season. On well-paved paths, you can get very close to the roaring giants and take a great souvenir photo. If you like it less turbulent, you should come in the evening, when most day tourists have already left. 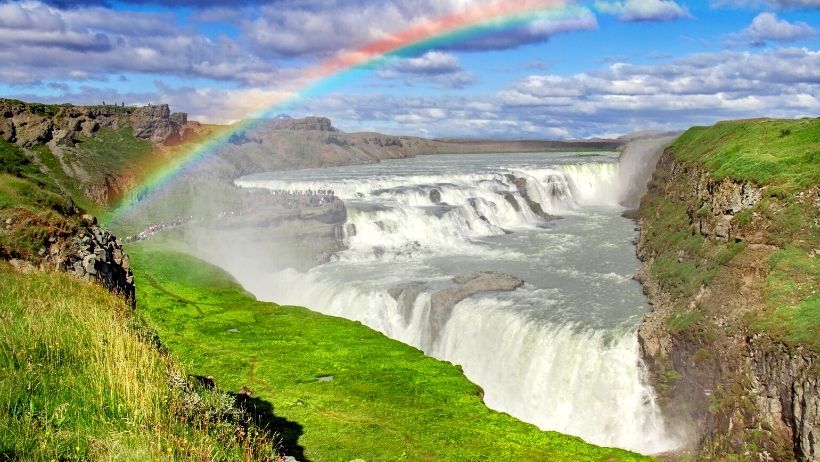 The 150 meters wide Rhine Falls in Switzerland is one of the largest waterfalls in Europe. Its enormous amounts of water, which are roughly double that of the Dettifoss just presented, fall spectacularly around 23 meters into the depth. If you would like to experience the Rhine Falls from a very special perspective, I recommend a boat trip in the basin of the waterfall. 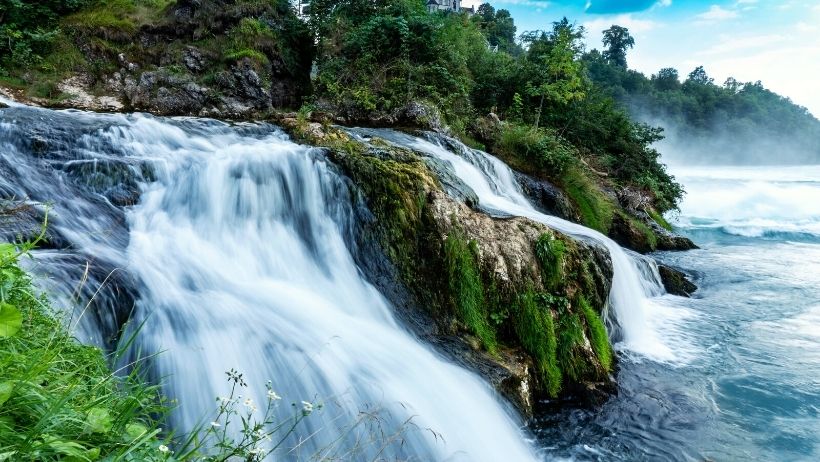 Niagara Falls in the US and Canada

The Niagara Falls on the border between the United States and Canada are the best known and most impressive waterfalls in the world. It has a drop height of around 21 to 34 meters. On the Canadian side is the Horseshoe Falls, the water of which falls around 52 meters. While the visitor platform directly at the falls is completely free, you can take part in a boat tour for the equivalent of around € 20, during which you can get up close and personal with the thundering falls. 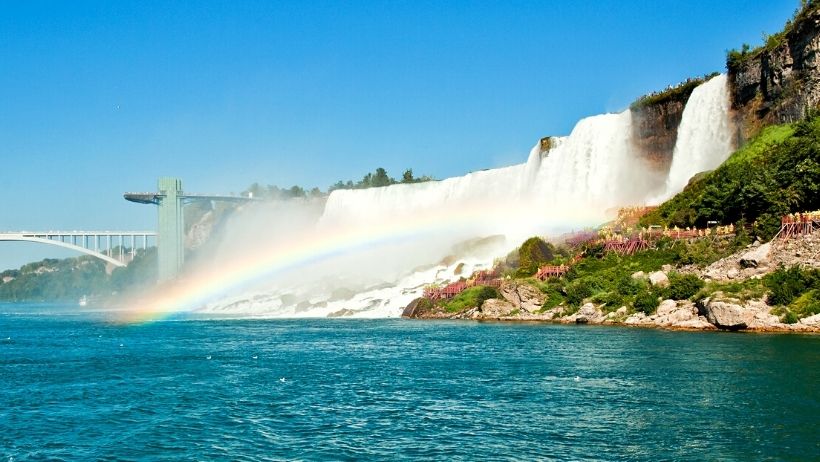 Victoria Falls between Zambia and Zimbabwe

The Victoria Falls are like the Ban Gioc-Detian Waterfall and Niagara Falls. It is also on an international border – between Zambia and Zimbabwe. Here, up to 3,000 tons of water per second flow with a thunderous noise, believe it or not, 100 meters into the depth. The waterfalls have even been declared a UNESCO World Heritage Site. There are many excursions and adventurous activities are offered around Victoria Falls. The craziest and most dangerous is probably a swim in the Devils Pool right on the edge of the waterfall. Would you dare to do that? 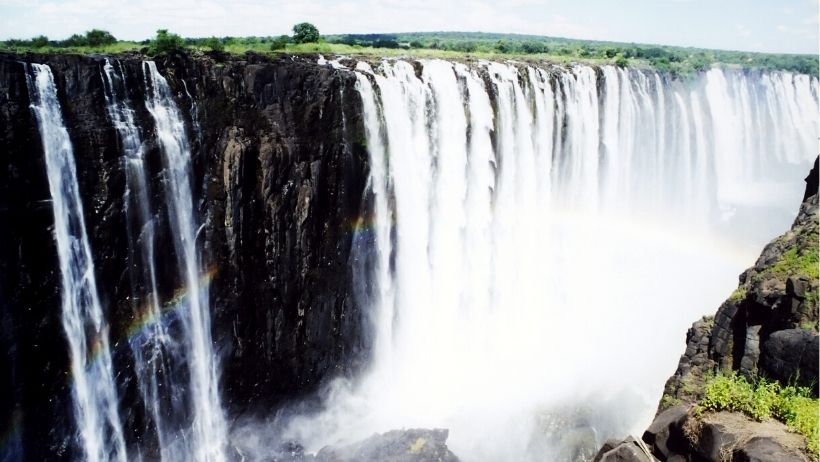 The Iguazu Falls are also located on a national border. The border between Brazil and Argentina. A 700 meter long and 150-meter wide gorge is peppered with a total of 275 large and small waterfalls, which together form the Iguazu Falls, which are a UNESCO World Heritage Site. Sometimes the unbelievable amounts of water plunge up to 82 meters into the depth. A sight that makes us aware of the elemental forces of our earth. The best way to see the falls is from the Brazilian side. It’s best to come early in the morning so you can enjoy the panoramic view undisturbed. 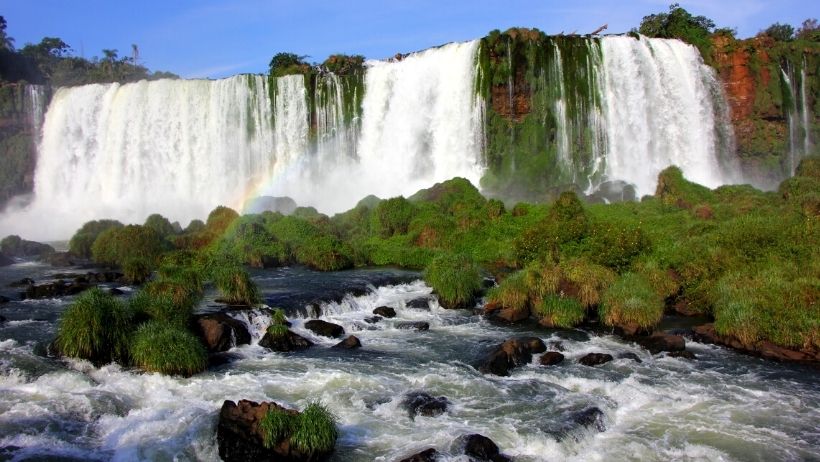 Salto Sapo is located in the Canaima National Park in southeastern Venezuela,. It is characterized by a special feature, it is similar to the Seljalandsfoss in Iceland, you can walk behind the mighty waterfall thanks to a hollow. 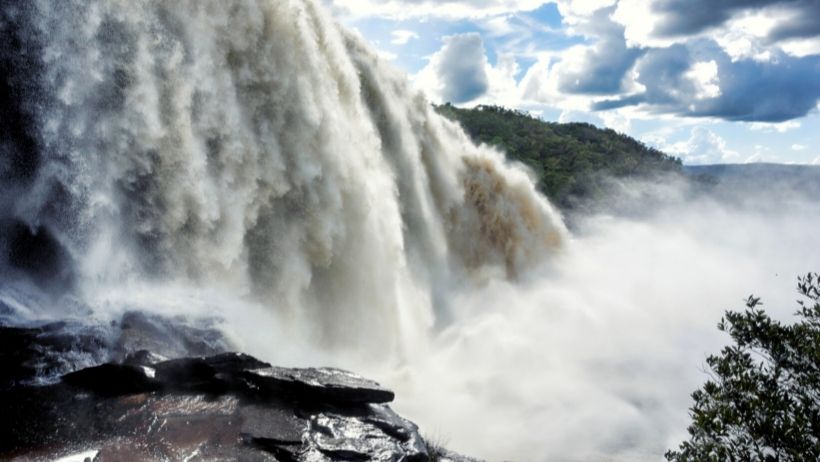